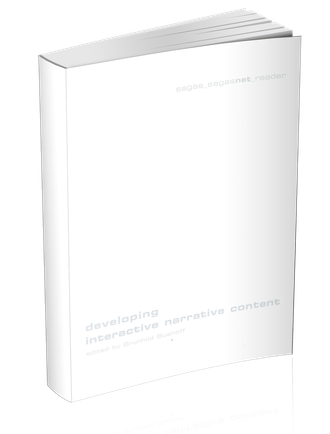 (iBusiness) Since its early days the field of interactive digital media is driven by technological innovation. Up to now this is hardly balanced by appropriate innovation contentwise. This is especially true when considering fictional content. A new compilation of articles 'sagas_sagasnet_reader: Developing Interactive Narrative Content' published at HighText-Verlag, sheds light on the broad spectrum of issues to be considered while developing interactive narrative content and is written for all with an interest in the development of storybased interactive applications.

have been focusing on furthering narrative content development for this field for several years. sagas has done so through cross-disciplinary, team-oriented workshops and labs, exploring the narrative potential of interactive media. sagasnet, on the other hand, through events and consultations assisting independent professionals in the development of interactive applications.

The reader ist edited by Brunhild Bushoff. After completing her university studies in journalism, history and literature at the Westfälische Wilhelms Universität in Münster (Ph.D., 1984) she worked as a journalist and author. Since 1997 she managed the interdisciplinary workshop series sagas writing interactive fiction: a vocational training project, organized by the Munich Film Academy in the framework of the MEDIA Plus Programme of the European Community, furthering the development of narrative content for interactive media. In 2002 she established sagasnet, an additional European training initiative and MEDIA PLUS Training project, aimed at promoting and supporting narrative interactive projects in development.